There is nothing more romantic than a night out on the pier. But let’s be honest, unless you grew up appreciating a fresh catch, you would probably avoid fishing docks like Redondo Pier. Not the prettiest site with the surrounding oil refinery, but little do you know that Redondo Pier hides the eighth wonder of the world… Korean Crab Houses, specifically Pacific Fish Center and Restaurant. Korean seafood plates are a speciality that not many people can say they have tried. It’s a shame because this is so damn good. Remaining a childhood favorite of mine, I would always fight to get the crab head, which holds the broth from the eggs and meat. Korean Crab Houses are simple in translation: it’s all about a meal of fresh fish and ingredients, an easy clean up, and bottles of Soju and Hite Beer. You might arrive at the pier a little lost with your eyes wandering to the comfort of Frozen Bananas and Ice Cream, but try something new. All you need is a curious appetite and some cash because fresh fish doesn’t come cheap. 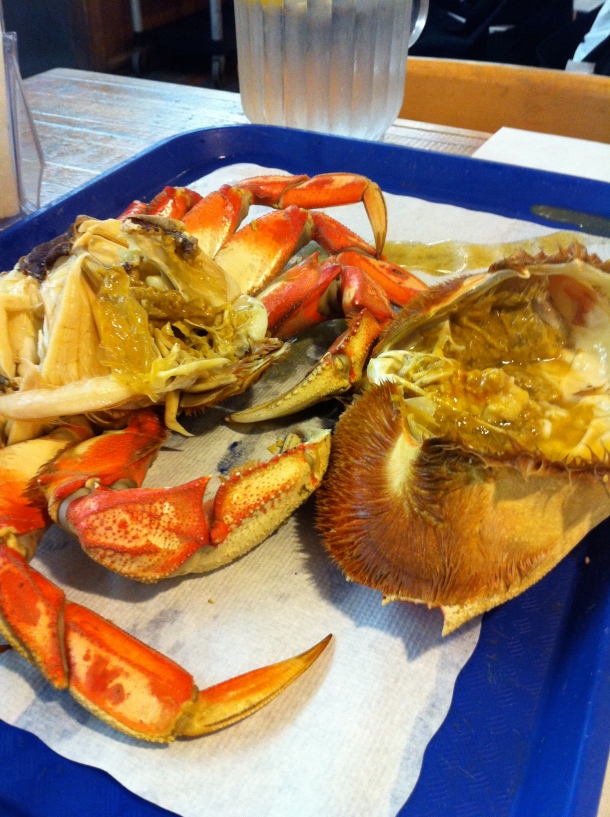 The pier has a couple Korean Crab Houses, but we flocked to the busiest one at the end of the pier. They all serve the same dish – crab, pretty much anywhere you like it. And like a caveman, you work to get your meal. Here’s a wooden mallet and a bib, good luck. No sweat right? After breaking the huge legs of the Dungeoness Crab, I uncovered mother nature’s greatest gift. Have you ever seen something so beautiful? You have your choices of Tabasco, clarified butter, and spicy chili paste. I prefer it plain, but the spicy chili paste does the trick. Why taint the taste of the sea? Do yourself the favor and don’t use the butter. This isn’t Red Lobster. And after enjoying the crab meat, the crab head is the diamond in the rough, the cherry on top, and the apple of my eye. Most seafood restaurants don’t serve this, but at Korean Crab Houses, these hold the most flavor. I scooped everything out, muscles, eggs, juices and left nothing for the taking. I think that speaks for itself.

So the seafood expedition began with a conversation about my craving for “maeuntang.” This is an every man’s meal because it’s made with whatever fish and vegetables are available for that day. It’s not complicated, just all about fresh ingredients for hungry mouths. It’s a comfort food that brings sweat to your forehead. When translated, the simple phrase means Spicy Stew and holds a medley of sea creatures. Usually made with cod fish, shrimp, tofu, an assortment of vegetables, this “tang,” also known as stew, is a spicy seafood orgy in your mouth. Everything in the melting pot is flavored with the infamous Korean red chili pepper paste and chili powder – the two things that melt my face, but also keep me begging for more. Far from elaborate, this homemade style Korean cuisine only demands plenty of napkins and a hearty bowl of sticky rice. If you don’t have a huge appetite like me, I say bring a party of hungry friends to the Korean Crab Houses. It’s easy to underestimate the servings so order accordingly. The proper Korean is never wasteful with food. 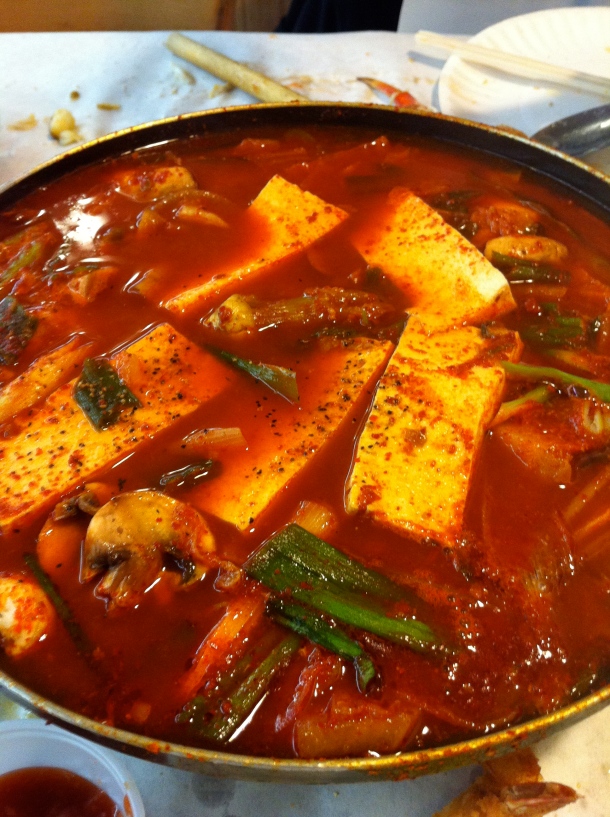