The title says enough. Anytime we Americans can fill anything that pours with anything containing any percentage of alcohol, oh we will do it. It’s called a Porrón, Porró, or Porron. I googled Porron and of course, there’s someone on Youtube, attempting to drink beer from the porron. The traditional glass wine pitcher originated from Spain and people take the art of porron drinking seriously. No offense to the masters of porron, but we filled it up with beer and called it a day. So much for taking the class out of classy.

Back to the basics. Been meaning to try out Santa Ana’s Playground for quite some time. Downtown Santa Ana isn’t the scene for Quinceañera dresses anymore. It’s been replaced with youthful girls in distressed denim and hormonal boys in the same damn heather grey button up. Playground only serves beer and wine, specializing in unique tastes. Because they claim the menu changes so often, I guess this won’t do you much good. But I saw porron, and thought ‘CHALLENGE.’

It’s all in your …hand? mouth? Well, both. Start with the tip pouring into your open mouth, swallow as your arm extends and don’t ever pull back. Continue extending as a steady straight flow pours gently into your mouth. Continue to swallow. When your thirst is quenched, gently bend your arm as you are bringing the porron closer to you. Warning: do not move your head and do not close your mouth. I warned you. 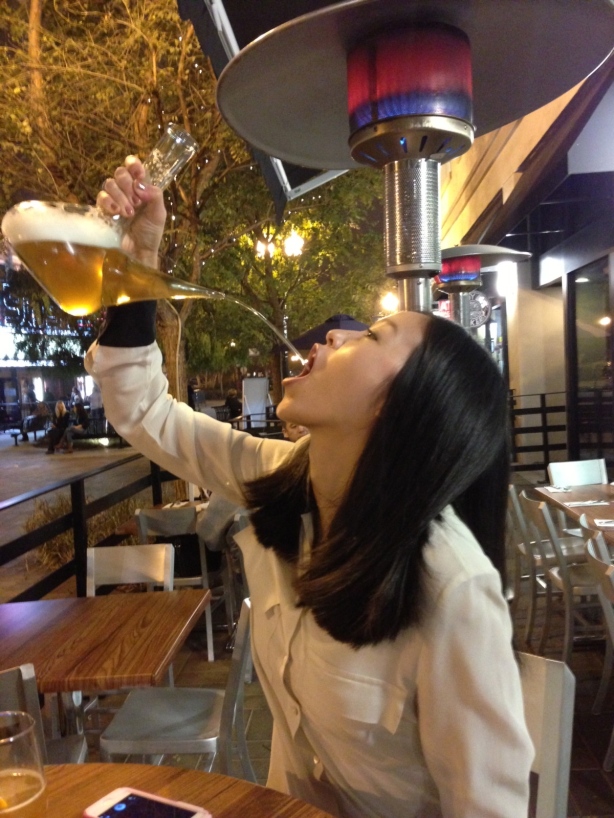